China: A Firewall Away from Facebook’s Global Conversations 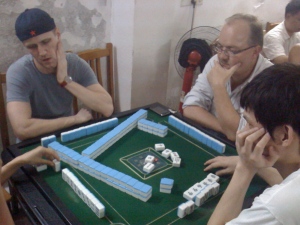 Social Interactions are a big deal in China, but not on facebook

Although some of my western friends in China have obtained access to facebook and other sites that are currently blocked by China’s great firewall, the large majority of Chinese citizens to do not have access to the same sites I am visiting on a daily basis.

While in China I realized Chinese citizens do have similar websites with many of the same features. In fact, they were quite savvy in their use of the Internet. Probably the most popular social website in all of China is QQ. When two individuals meet each other, rather than ask for a phone number, they usually ask for your QQ number.

Instead of www.youtube.com, the Chinese have www.youku.com, www.tudou.com, www.56.com, www.ku6.com, and many other video sites. On these sites you may not be able to see politically sensitive issues that China has censored, but you can find almost any movie or television show. Often, the movies are posted only days after being released in American theaters (usually poor quality video camera taping in the back of a theater, but still there. Later the higher quality versions are posted as the DVD is released). I was able to keep up with shows like Glee on Fox, even though none of the television stations were broadcasting the series.

Many of these videos are blocked in America because it is illegal. I wonder how American movie makers will be able to make money in China. I noticed 3D movies did get movie goers in the theaters, but it is extremely difficult to find a legitimate DVD anywhere in China because of all the high quality duplicates being sold on the street.

Almost any nationwide problem is going to be difficult to solve and the solutions won’t deliver timely results, but I fear that as China continues to increase its influence, the social influence will be stunted. No one has even heard of QQ in my circles here in the West. Global conversations are happening everyday and the Chinese are not a part of those conversations. There are other outlets, but let’s face it, facebook is the dominating conversation on the web right now. Therefore, the same old scenario continues, where the West only knows China by its governments actions and voice and have little to no contact with actual Chinese citizens, who will often disagree with their government’s activities.

I am a lover of China. I graduated from the University of Hawaii's China International MBA in 2010. At BYU, my undergraduate degree in history focused on modern US and Asian history. I am an expert negotiator and recently negotiated a multimillion dollar contract with the LPGA and IMG to bring the first ladies professional golf tournament to Mainland China since its first tournament in 2008. While in Utah, I helped an online marketing start-up company grow from 20 employees to over 120 employees as Director of Operations and later VP of Sales and Marketing. Whether its China, strategy, or sales, I love being with people and helping them see their own unique offering and how to align themselves accordingly.
View all posts by Global China Blog - Biz, Culture, and Life →
This entry was posted in Chinese Business, Chinese Culture and tagged 56.com, China, facebook, global conversation, great firewall of china, ku6.com, QQ, qq.com, tudou.com, youku.com, youtube, youtube.com. Bookmark the permalink.